In those days, Washington DC, was no place for two young beauties, bit we did the best we could. Our parents didn’t understand our ways so we hit the streets and let me tell you it was very dangerous and a great risk we took, I had been robbed, raped and almost killed at gun point. So one day in 1979 we made up our minds to hit the Big Apple, New York City.

It was Autumn and it was quite chilly and we had it all planed out with a bit of money saved we were on our way on the Trailways Bus. When we got to Port Authority bus station and saw the big sky-scrapers we got so excited and happy. We went to a hotel on 45th Street called The Normandy Hotel, it was right in front of the GG’s Barnum Room, a transsexual club that was huge and had the most beautiful girls I had ever seen. I was in heaven. We got unpacked, rested, paid the hotel room for a week and got ready to hit the New York nightlife. 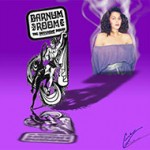 The huge club across the street from our hotel at the time was well known all over the world for the beautiful transsexuals. So went and got all dolled up. I was sitting at the bar and a French gent approached me he brought me a drink and we went on speaking. He offered me a huge amount of dollars for half a night. I did not hesitate. I came back to the hotel at 3am with $500 in my purse! I couldn’t believe it, in those days the $$ was great with the clients. You would be at any disco club like Plato’s Retreat, Studio 54, Crisco’s, 220, Paradise Garage, Zena’s. We were doing great!